Deanston is housed in a former cotton mill in the central Highlands that dates back to the late eighteenth century. The buildings were converted in to a distillery in 1966. It was acquired by Invergordon in 1972, but ceased production in 1982 and was mothballed until 1990. Deanston is now operated by Distell. 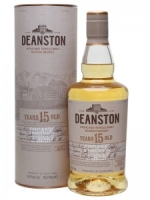