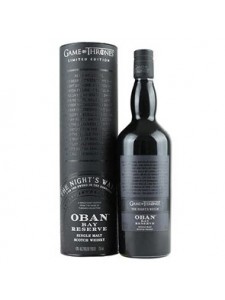 The Night's Watch--
Situated in the Scottish port of Oban, the Oban Bay distillery might be one of Scotland's smallest distilleries but it can certainly produce some of the most flavorful Scotch whiskey. Known for their unique "West Highland" flavor that blends dry, smoky style of the Scottish islands with the lighter, sweeter flavors of the Highlands, the distillery was recently chosen to craft by parent company Diageo to craft a commemorative bottling based on HBO's hit fantasy series Game of Thrones.

Chosen to represent the selfless men of the Night's Watch, the distillery released the Oban Bay Reserve - The Night's Watch as a rich and wintery expression that perfectly embodies the ancient order. Distilled from 100% malted Scottish barley and matured in oak barrels, the Scotch conveys a well-balanced spicy and woody dryness that is guaranteed to stave off even the harshest of winters and even a White Walker invasion