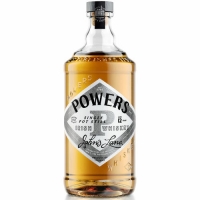 Crafted at the Midleton Distillery, Powers John Lane Single Pot Still Irish Whiskey is named after the original Powers Distillery, which was situated on John's Lane in Dublin. The whiskey is made exclusively from malted and unmalted barley, which is triple distilled through pot-stills in traditional Irish fashion. Following distillation, a portion of the whiskey is matured in first fill ex-bourbon casks, while the remainder is aged in casks that were previously used to mature Oloroso sherry. After a twelve-year beautyrest, the whiskey is bottled 92 proof.

Powers John Lane Single Pot Still Irish Whiskey has a sharp aroma of honey and spices that gives way to notes of leather, charred wood, milk chocolate and apricots on the palate. The finish is chewy and bold, with touches of herbs, fresh citrus and honeyed oak. The whiskey was named the Irish Whiskey of the Year in 2012 by Jim Murray's Whisky Bible.