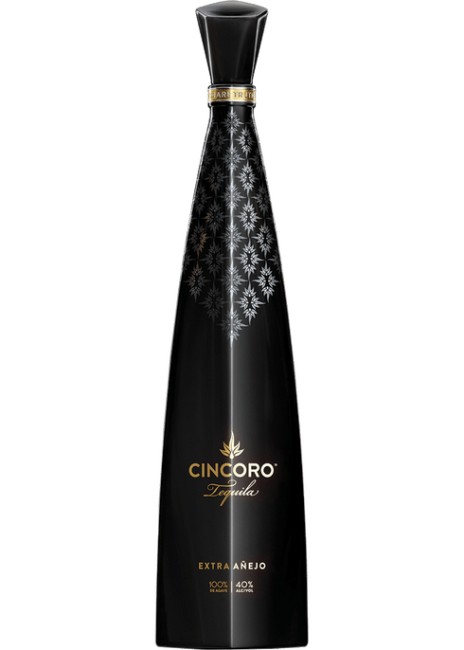 Distiller Notes Cincoro Extra Anejo is a very rare tequila produced in limited allocations. Consistent with their younger aged expressions, Extra Anejo is aged in used American bourbon barrels imported from Kentucky for 40-44 months in an underground cellar, far longer than required for Extra Anejo tequilas. Subtle notes of wood, spices and light cooked agave on the nose followed by intense oak, sweet agave, caramel and light vanilla on the palate. Proof: 80 HISTORY Cinco Spirits Group is named after the five partners connected by a mutual love for two things: tequila and basketball. Founded by Jeanie Buss, Wes Edens, Emilia Fazzalari, Wyc Grousbeck and Michael Jordan, Cinco Spirits (coincidentally the same number as players on a basketball team) currently has four tequilas in their lineup—a Blanco, a Reposado aged 8 to 10 months, an Añejo aged for 24 to 28 months, and an Extra Añejo, aged for as long as 44 months. The tequila team taste-tested over 1,000 different tequilas before finding their signature blend. Cincoro agave is hand-selected from private farms in the San Miguel el Alto region in the highlands and the El Arenal region in the lowlands. This combination serves as the base of the Cincoro signature house tequila. The agave is harvested after a minimum of six years, ensuring the highest sugar levels required to make a high-quality tequila. Artisanally distilled in small batches, Cincoro tequilas are slow-cooked for 35 hours using a 35-year-old traditional clay oven, crushed with a traditional stone mill, and fermented with proprietary yeast. After distillation, this tequila is aged in ex-American whiskey barrels at the distillery for 40-44 months, in an underground cellar for added flavor and complexity. Aged far longer than required for Extra Añejo tequilas, Cincoro Extra Añejo is deep copper in color from the additional time in the barrel, cooked agave, with toasted oak and dried fruits on the nose. Elegant on the palate with notes of wood, raisin, fig, light coffee, dark chocolate. An exceptionally long finish, with the complexity of a fine Cognac. Sip neat. Bottled in a contemporary five facet bottle (like an agave leaf) with a “Crown” stopper. This exceptional Extra Añejo earned a Double Gold Medal at the 2019 SIP Awards.