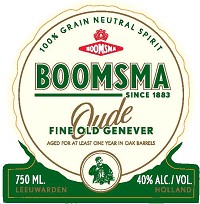 Time is the most important ingredient in J. Boomsma&#8217;s Âlde Kapteyn Real Old Geneva. This truly old genever is one of the very few in the Netherlands which is aged in small, oak barrels for more than one year. This allows the fine grain distillates and pure grain and malt wine to develop in peace. After at least one year of ripening, and when the genever is brought up to drinking strength, this tender old genever has to ’marry’ for a further two months. The result is an old genever which is as good as gold and as smooth as silk. Producer The first bottle of Boomsma ’Oud Friesche’ Beerenburger was produced around 125 years ago. This distinctive bitters became widely popular in no time. Today Boomsma offers an extensive range of drinks. Many of these are distilled and bottled in house. At the beginning of the Nineteen Seventies Boomsma started to import a selection of quality wines from around the world. Conversely, many litres of the Boomsma range have been distilled for export. The demand in other countries for whisky, vodka and rum has been increasing for years and typical Dutch genever and bitters are becoming more and more popular abroad. In contrast to most other distilleries, Boomsma Distilleerderij is still an independent family owned business. The fifth generation is now in charge, thereby ensuring that old traditions are cherished and new ambitions fulfilled. Anyone who wants to find out more is welcome to visit the Boomsma Museum. This charming museum in the city centre of Leeuwarden also houses an inviting tasting room.