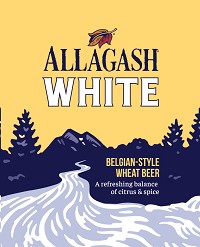 Our interpretation of a Belgian-style wheat beer is brewed with oats, malted wheat, and unmalted raw wheat for a hazy, “white” appearance. Spiced with our own special blend of coriander and Curacao orange peel, Allagash White is both complex and refreshing. Though it’s brewed in Maine, the recipe sticks to its Belgian roots. We’ve worked hard to make sure that the Allagash White in your hand tastes the same as it did back in 1995, when Rob Tod brewed the first batch. Producer Allagash Brewing Company started in 1995, as a one-man operation in a small space on the outskirts of Portland, Maine. Founder Rob Tod had worked in a brewery setting before and recognized a void within the craft brewing movement. While both German and British styles had become prevalent throughout the U. S. , the ever-creative Belgian-styles were very difficult to find. Through his travels, Tod had sampled many of these unique beers and felt that the flavors and traditions of Belgium needed to be shared with the American drinking public. He designed a small 15-barrel brewhouse, gathered the finest array of authentic raw materials and began his quest towards the production of traditional Belgian style ales. Rob sold his first batch of beer in the summer of 1995. The first release from Allagash was Allagash White, modeled after the traditional ”White” beers of Belgium. Also referred to as ”wit” beers, they get their unique flavor from the use of wheat in place of barley, and the use of Curacao orange peel, coriander and other spices. Allagash combined these ingredients with their very own proprietary Belgian yeast strain to create the remarkably unique and refreshing beer that is today their flagship brand. With the success of the first brand, Rob decided to venture further into the Belgian beer genre. He hired his first employee and soon released a second brew, Allagash Double Ale. Using the philosophy and techniques created by the Trappist Monks of Belgium centuries ago, they created this beer using seven different malts, a traditional sugar, and their own Belgian yeast strain. The result was another unique yet balanced beer crafted in the classic Belgian style. In 2001, Rob and the Allagash crew wanted to continue to pay tribute to Belgian brewing traditions by delving into the world of cork and cage finished beers and bottle conditioning. At the time, almost no one was doing this here in the states, but Allagash knew the process was more than just a new look. Bottle conditioning is the process of adding sugar and yeast, just prior to bottling, to allow for natural carbonation of the beer. The resulting beer is softer and more complex than traditionally carbonated beers. This ”live” beer also continues to develop flavors over time, enhancing the beer drinker’s experience. Today, Allagash has six year round beers in its portfolio, seven yearly releases and numerous one-offs and keg only releases. We continue to be successful by pushing the limits of beer and themselves. We have always strived to produce the finest Belgian inspired and experimental ales this side of the Atlantic. Allagash began as New England’s original Belgian-Style brewery and have grown into one of the industry’s most distinguished and well-respected brands.