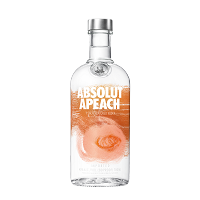 A complex taste of apricot and peach, the fruitiness of Absolut Apeach is balanced with a touch of tropical fruit flavor. With a fresh character that's rich and smooth, each sip is succulent and luscious.