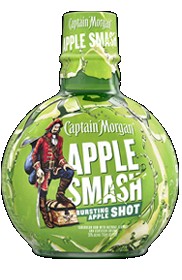 Captain Morgan Apple Smash blends our Caribbean rum with a burst of green apple flavor that is sure to be a favorite amongst the crew. This tastes delicious as a chilled shot, a mixed shot, or simply mixed with club soda for a fresh tasting cocktail. For the captain’s gluten-intolerant crew members, you will be happy to know that apple smash is gluten free. Find this unique scratch and sniff bottle in stores today! Technical notes ABV (30%)
Producer When Sam Bronfman, President and CEO of Seagram’s drinks company, arrived in the Caribbean in the 1940s, he was mesmerized by the opportunities presented by spiced rum. He quickly set about becoming ”Rum King of the World” and established a network of trading relationships with distillers across the region, founding the Captain Morgan Rum Company in 1945. When the Captain Morgan Rum Company subsequently purchased the Long Pond Distillery in Jamaica, Sam bought an age-old family recipe for spiced rum from the Levy Brothers, two Jamaican pharmacists from Kingston. That recipe would become the inspiration for Captain Morgan Original Spiced Rum.