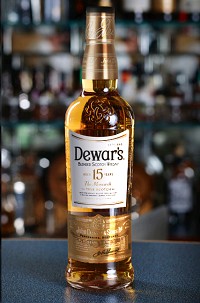 Known as 'The Monarch'. This rare and special whiskey is named after the famous painting, 'The Monarch of the Glen'.
In 1851, Sir Edwin Landseer created the famous painting, an instant masterpiece, that depicts a stag in the Scottish Highlands. John Dewar and Sons purchased the painting in 1919 and hung it proudly.
Master blender Stephanie Macleod used the painting as inspiration for this rare and special whiskey.

Producer
THE PERFECT LOCATION FOR A WHISKY DISTILLERY
First planned in 1896 by the sons of John Dewar, Dewar's Aberfeldy Distillery is the only Scotch whisky distillery built by the Dewar family. Dewar's was already a highly successful brand of blended whisky, renowned for its quality, and the company needed more single malt whisky to use in its blend.

There were a number of reasons behind the decision of Tommy and John Alexander Dewar to build their whisky distillery in the heart of Highland Perthshire, on the outskirts of the village of Aberfeldy. The presence of a superb natural water source in The Pitilie Burn (or small river) which runs past the distillery into The River Tay, was undoubtedly a big factor in the decision. The gold-rich waters of the Burn are used to make Aberfeldy whisky to this day.

There were also excellent transport links by train to nearby Perth, bringing fuel and barley to the distillery, and returning the finished product to be blended and bottled. This made the process of bringing the whisky to market very efficient. The line is no longer open, but a steam engine with carriage bearing whisky barrels remains on the site to this day.

The final reason may have been a sentimental one. The humble croft where our founder, John Dewar, was born, is just three miles from Aberfeldy in the small hamlet of Dull, so the building of Aberfeldy by his sons was a homecoming of sorts.

THE BUILDING OF ABERFELDY DISTILLERY
The architect behind Dewar's Aberfeldy Distillery was the foremost distillery architect of the period, Charles Doig, whose signature pagoda roof still dominates the distillery's skyline. The foundation stone was laid in 1896, with production beginning in 1898.

Aberfeldy is an excellent example of logical design, with the various processes of whisky making laid out in a linear fashion.

WHISKY PRODUCTION TODAY
The Dewar family's pursuit of whisky perfection continues to this day, and we still produce whisky in a way that they would recognise instantly. In common with most Scotch whisky distilleries, malted Scottish barley to make the whisky is brought to site, with the old Malting House now home to our beautiful Whisky Lounge and Cafe. Due to vastly increased demand, we now mature our spirit elsewhere in Scotland, meaning our former filling station and warehouse have escaped modernisation and serve as a highly atmospheric tour area and home to our Cask Tasting.

This is the ideal backdrop to explain how Dewar's premium blends are 'double-aged', with a secondary resting in oak barrels once the blend is created. The costly process gives an extra smoothness to the final whisky.

The creation of the distinctive Aberfeldy spirit all takes place onsite, with our extra long fermentation in larch washbacks, and distillation in our tall pot stills overlooking the rolling Perthshire hills. These processes create the honeyed-richness for which Aberfeldy whisky is renowned. Now popular in its own right as a single malt, Aberfeldy still makes up the heart of the Dewar's blend, contributing its heather honey flavour to America's best selling Scotch whisky.