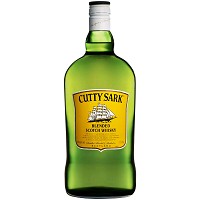 It is matured predominantly in American oak casks which impart less colour to the spirit but impart further subtle and complex flavours. Once matured, the malts are blended together, as are the grain whiskies. This process is a particular feature of Cutty Sark and ensures the final blend is harmonised and, therefore, consistent in colour and flavour.

Producer
An old-fashioned lunch in the parlour of 3 St James's Street in London on 23rd March 1923 changed the course of Scotch whisky history for ever. In attendance were Francis Berry and Hugh Rudd, the partners of the world's most prestigious wine and spirits merchants, Berry Bros. & Rudd, together with Scottish artist James McBey. The conversation turned, inevitably, to whisky; Berrys had been selling its own brands for some time in the UK and a small amount had been exported to the USA to private customers immediately before World War I. Berry Bros. & Rudd, like all good merchants, knew what their customers liked and felt that heavy, dark whiskies would spoil the palate of their wine-loving clientele. The USA was in the grips of Prohibition but there were signs that this would not last forever; the partners saw an opportunity to create a new type of blended Scotch specifically for an international market. It was suggested that this whisky should differentiate itself from those already available by being lighter in style, blended only from the very finest whiskies. The new blend was to be bottled at its naturally pale colour to avoid the danger of caramel colouring masking its more subtle flavours. Coincidentally, this style of blended whisky would suit their personal tastes as wine drinkers.

Other blenders continued to market heavier, darker blends giving the new Berry Bros. & Rudd blend a real point of difference in an already competitive market. All that was missing was a name; the world's fastest ship a tea clipper named Cutty Sark had just returned from many years trading and was much in the news at the time. James McBey, a keen sailor, suggested that this would be an admirable name for the new whisky. He then proceeded to draw a preliminary design on a napkin and used the correct term 'Scots' rather than the more common 'Scotch' whisky.